How Doctors can really cut costs for medicare patients. 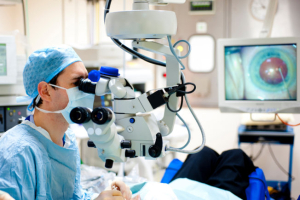 The best use of Medicare Oversight?

Physicians are eyeing the wrong procedures in the quest to cut costs for Medicare patients.

No one could question efforts to deter care that is harmful or a waste of time. But if physicians expect to enlist consumers and insurers in this campaign, it would help if doctors were doing more than criticizing what other doctors do. It would help if their criticism was based on evidence of actual patterns of care observed in large data sets and if the reasons for such criticism could be well-identified. It would also help if changing the practices they criticize might lead to saving some serious money.

The most recent example of physician efforts to document low-value care is a study reported last month in the New England Journal of Medicine, titled “Preoperative Medical Testing in Medicare Patients Undergoing Cataract Surgery.” Cataract surgery, to replace a clouded lens in the eye, is the most common elective surgical procedure for elderly people; it is a safe and effective way to improve vision and is usually performed by an ophthalmologist in an ambulatory setting. Despite guidelines that do not call for any specific tests before this surgery, it is fairly common for routine tests such as an EKG or chest X-ray to be performed, to “rule out” cardiac problems. However, previous research finds no evidence of benefit (reduced adverse events or improved outcomes) from such preoperative testing.

The study looked at all Medicare patients who had cataract surgery in 2011 and found that in the month before surgery, 53 percent of patients had at least one test, and 13 percent had five or more. Interestingly, the best predictor of whether or not a patient got testing was not the patient’s medical condition but whether the doctor typically ordered testing for all cataract surgery patients. Some doctors had a testing-intensive style of practice.

While these tests seem to have little medical rationale (although they are unlikely to do harm, directly or indirectly through additional care from false positives), a number from the journal article caught my economist’s eye: Medicare payment for these tests in the month before cataract surgery was $16.1 million for the 440,000 or so beneficiaries in the study, $5 million more than monthly expenditures on testing in the baseline period. Some of the commentary on the study suggested that Medicare might therefore want to single out doctors doing such testing for “talking to” about their practices.

One million dollars, and even more so $5 million, is still serious money. But is focusing on preoperative testing for cataract patients the best way for Medicare to allocate its limited oversight resources? And would physician actions to discipline their fellows matter to consumers, insurers or taxpayers? Maybe not. Medicare reimbursement for basic cataract surgery (including surgeon fee and facility fee) runs about $2,500 per procedure in a hospital outpatient department. So the total payment for the surgery for the 440,000 patients would be about $1 billion. Compared to that, $5 million or even $16 million is chump change. If the best that physicians have to offer is saving on the cost of tests that amount to about 1 percent or less of total spending represented by this example, we will not notice appreciable reductions in total health care costs. Medicare might refuse to pay for preoperative testing, but that would require development of a system to identify and verify which tests were done only in anticipation of the surgery, a challenge in itself.

Here, as always, the Willie Sutton principle (rob banks because “that’s where the money is”) suggests that the focus should be on more costly and perhaps more controversial physician practices than this one. For example, the internal medicine physicians have included the annual physical (currently covered, incidentally, by Medicare) as another procedure for which evidence of benefit, much less value, is lacking; that would be a far better target for saving time and money. As Medicare moves to alternative payment arrangements in which fee-for-service is replaced by per-enrollee payments to Accountable Care Organizations and the like, preoperative testing costs may be a target for these organizations themselves. But even here they might prefer to concentrate on situations where the money is.