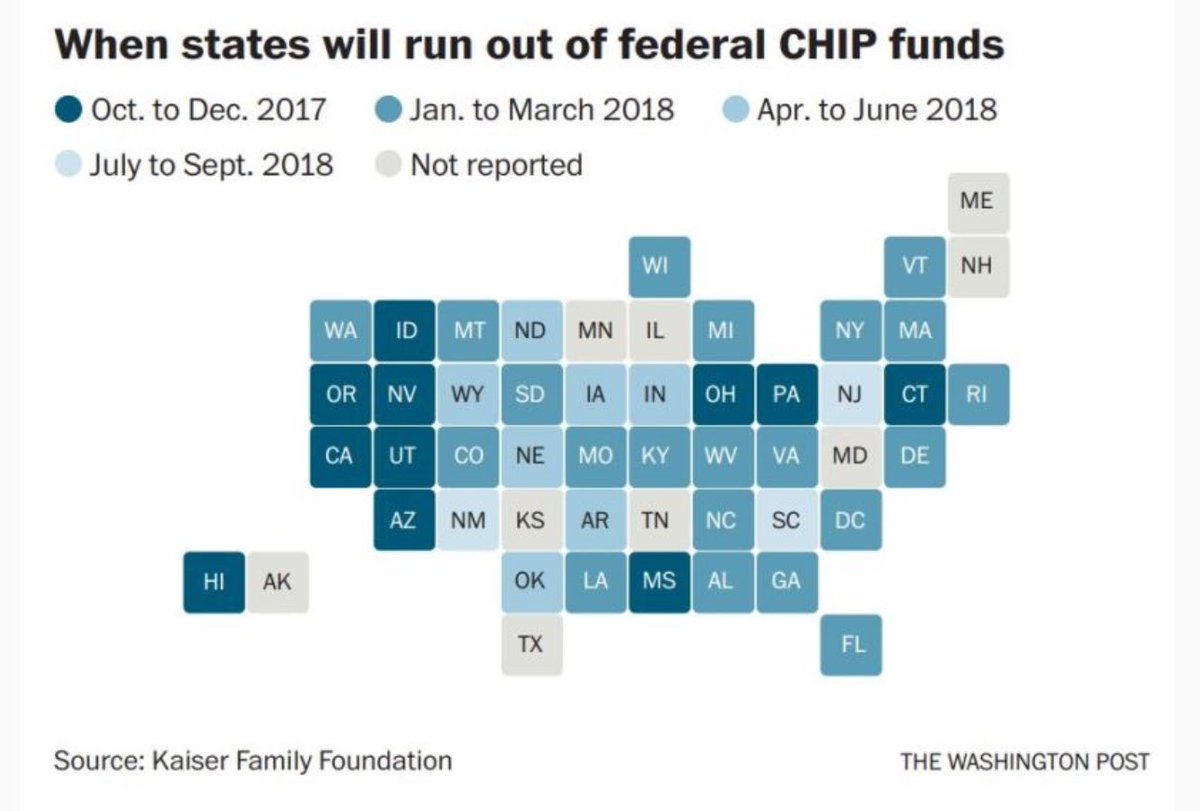 Child healthcare advocates have been warning, and warning, and warning that Congress’ delay on reauthorizing funds for the Children’s Health Insurance Program places health coverage for as many as 9 million children and pregnant women at risk. But since the funding expired Sept. 30, there has been no action by Congress.

Now, advocates say, “the nightmare scenario is close” for states across the country, to quote former Medicare and Medicaid chief Andrew Slavitt, as the state-federal program runs out of federal money. State officials in Colorado started sending letters to families on CHIP as early as Monday, warning them that their kids’ health insurance could run out Jan. 30 and they should “start researching private health insurance options.” If Congress doesn’t vote within two weeks to resume the program’s $15 billion in annual funding, the state officials said, they would send out official notification of the program’s cancellation.

A similar high-wire act is playing out in at least 11 states whose CHIP coffers will be exhausted by the end of December, according to the Kaiser Family Foundation; that roster includes California. In Colorado and 20 others, there’s just enough money left from earlier appropriations to last into the first month or so of 2018.

We’ve sounded the alarm about the expiration of CHIP in four columns since May, when congressional dysfunction built to the point that a reauthorization of CHIP by Sept. 30 began to look doubtful. The fears of children’s advocates proved true when the deadline passed without a vote; but even then most assumed that the delay would be brief, and the issue would be resolved before too many states had to take stringent measures. That point is now long past.

As of Thursday, Congress will have gone 60 days without funding a program delivering healthcare to millions of low-income children. If you wrote this in a novel, every publisher in the country would reject it as cartoonishly malicious.

Time’s up: As CHIP expires unrenewed, Congress blows a chance to save healthcare for 9 million children
It gets worse. The same day that CHIP expired, so too did the Community Health Center Fund, which was created in 2010 to help keep clinics serving low-income patients afloat. The CHC fund is caught in the same limbo as CHIP; without its $3.6 billion in government funding, 1,400 clinics will face average budget cutbacks of 70%, according to the National Assn. of Community Health Centers.

States trying to keep their CHIP programs operating have tried a variety of stratagems, according to Mattie Quinn of Governing Magazine. Minnesota, which was on the verge of going bust in October, managed to cadge $3.6 million in emergency funds from the government to carry it through the end of the year. Arizona Gov. Doug Ducey is pondering whether to raid his state’s rainy day fund. But as deadlines approach, most states have little choice other than to start throwing children off the CHIP rolls, cutting back on services or shutting down completely. Because even a wind-down takes time, states are drafting notices now warning families of CHIP’s termination in the next few months.

As we’ve reported before, none of this is remotely necessary. CHIP is one of those rare programs that has enjoyed bipartisan support since its inception. Nor has its effectiveness ever been questioned: Since its creation in 1997, the uninsured rate among children 17 and younger has fallen from 14% to 5%.

In recent years, however, even the principle of providing health coverage for children has become infected with budget-hawk ideology. In 2015, budget brinkmanship resulted in CHIP’s getting reauthorized for only two years. This time around, the program got shunted to the back burner as the deadline approached because congressional Republicans could think only about trying to repeal the Affordable Care Act. CHIP was further victimized by anti-ACA sentiment in the GOP caucus when a compromise funding bill provided for rolling back an increase of 23 percentage points in the federal funding share that had been instituted under Obamacare.

Currently, a CHIP funding bill is frozen because the GOP insists on taking money from ACA public health programs to pay for it, an idea that Democrats won’t accept.

Ever since Sept. 30, CHIP has been sidelined by one GOP idee fixe or another. Currently, the Republican caucus has no time for any issue but delivering a massive tax cut to the wealthy, at the expense of moderate- and low-income families.

Three weeks and counting: As Congress dithers on children’s health program, more states face crisis
Even Sen. Orrin Hatch (R-Utah), who was one of CHIP’s original sponsors in 1997 and frequently mentions his devotion to children’s welfare, is willing to sacrifice his own brainchild to the needs of plutocrats. In a “heated exchange” this month in the Senate Finance Committee hearing room reported by the Washington Post, Hatch responded truculently to a goad by Sen. Sherrod Brown (D-Ohio) that he should show his devotion to the poor by extending CHIP.

But the approach of the ultimate deadline is inexorable. According to congressional calendars, Dec. 8 is the last day Congress can agree on a budget before a government shutdown occurs. That’s 11 days from now, if you’re counting. The chances that CHIP will continue to be sidelined until then and beyond are looking very good, and for children, that’s very bad.

Keeping up with ICD-10 education