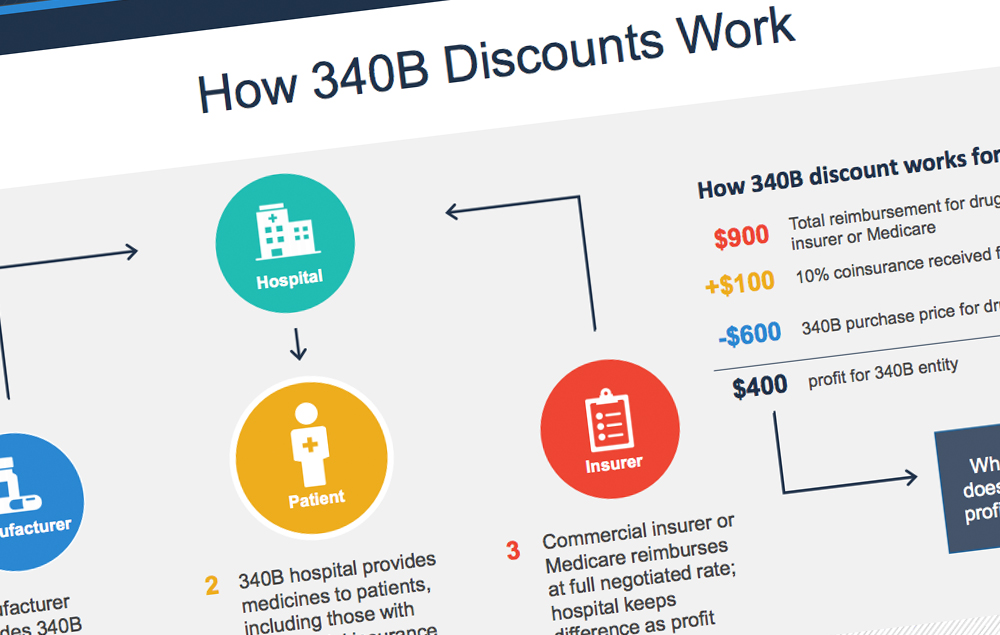 A program meant to help the poor has grown beyond its original intent.

Most hospitals are nonprofit and justify their exemption from taxation with community service and charity care. But the Trump administration could require some of them to do more to help the poor, and the hospitals that are in the cross-hairs are those benefiting from an obscure drug discount program known as 340B.

The 340B program requires pharmaceutical manufacturers to sell drugs at steep discounts to certain hospitals serving larger proportions of low-income and vulnerable people, such as children or cancer patients. The participating hospitals may charge insurers and public programs like Medicare and Medicaid more for those drugs than they paid for them and keep the difference.

By one estimate, the program saved hospitals $6 billion in 2015 alone. The original intent of the program, enacted in 1992, was for hospitals to use the revenue to provide more low-income patients a broader range of services.

Many institutions that serve mostly low-income and uninsured populations say they need the program. “Most nonprofit hospitals have very slim profit margins, and they’ve come to rely on this revenue,” said Melinda Buntin, chairwoman of the Department of Health Policy at Vanderbilt School of Medicine. A hospital lobbying group said that for some rural hospitals, the funding cut “could actually be the difference between staying open and closing.”

But there is concern that 340B has come to include hospitals that don’t need the extra help and are not using its windfall as originally intended.

The program has grown considerably, most recently as a result of an expansion included in the Affordable Care Act. As of 2004, about 200 hospitals benefited from the 340B program; by 2015, over 1,000 were participating. The program now encompasses 40 percent of all hospitals and an even larger number of hospital-affiliated clinics and pharmacies.

It might seem odd to give discounts on drugs to help hospitals offer care to low-income patients. How can we be sure they’ll use the money for that?

An increasing number of hospitals are not.

A study published in JAMA Internal Medicine found that the early participating hospitals were more likely to be located in poor communities with higher levels of uninsured people, to spend more of their budget on uncompensated care, and to offer more low-profit services than hospitals that started participating later.

“The 340B program may produce the results intended at some hospitals,” said Sayeh Nikpay, an assistant professor at Vanderbilt University and a co-author on the study. “But as the program grew, it benefited many hospitals with less need for assistance in serving low-income populations.”

Other research corroborates that hospitals aren’t using the 340B program as intended. A study in The New England Journal of Medicine was unable to find any evidence that profits from 340B have led to more access to care for low-income patients, or reductions in mortality rates among them. Another study in Health Affairs found that 340B hospitals have increasingly expanded into more affluent communities with higher rates of insurance.

The 340B program may have also inadvertently raised costs — for example, by encouraging care in 340B-eligible hospitals that could have been provided less expensively elsewhere. A study in Health Services Research found that hospital participation in 340B is associated with a shift of cancer care from lower-cost physician offices to higher-cost hospital settings.

The program may also encourage providers to use more expensive drugs. The more hospitals can charge insurers and public programs for a drug — relative to how much they have to pay for it under the program — the greater the revenue they receive. They also receive more revenue when the drugs are prescribed more often.

In January, Medicare lowered the prices it pays for 340B drugs by 27 percent. Although this move chips away at how much hospitals can benefit financially, it does little to address how much insurers and individuals pay for prescription drugs or the value they obtain from them. In addition, the move does nothing to increase hospital spending that could help the poor.

It may even harm some health care organizations, leading to lower-quality care at those institutions that are helping the poor. Studies have shown that, by and large, when hospitals lose financial resources, they make cuts that could harm some patients.

This can happen if cuts lead to reductions in workers who perform important clinical functions. A study in Health Services Research found that hospitals cut nursing staff in response to Medicare payment cuts in the late 1990s. Heart attack mortality rates improved less at hospitals that had larger cuts.

Another response to reduced revenue is cuts to specific services, which would harm patients who rely on them. A study by economists from Northwestern’s Kellogg School of Management found that some hospitals that endured financial setbacks during the Great Recession cut less profitable services like trauma centers and alcohol- and drug-treatment facilities.

Another study looked at a 1998 California law that required hospitals to comply with seismic safety standards — imposing a large cost on those institutions, without providing additional funding. Hospitals that were hit harder financially by this law were more likely to close; government hospitals responded by reducing charity care.

Hospitals could absorb cuts without harming care if they could become more productive — by doing more with less. Historically, there is very little evidence they have been able to do that.

Two powerful lobbies are now battling each other, with the pharmaceutical industry arguing that 340B has grown well beyond its original intent. Hospital lobbying groups are fighting back and also squaring off against the government, suing over the planned federal cuts.

Those are big clashes over a program that began modestly a quarter of a century ago to help the poor, albeit in a most convoluted way.

Are you prepared for the ICD-10 deadline?