The State of ICD-10 Implementation: Calm, and Qualms 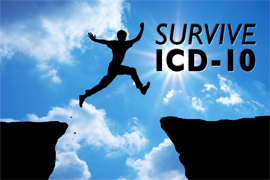 Yes, there is calm. By almost all accounts, the switch from the old ICD-9 codes to their more voluminous and complicated replacements has not produced a feared spike in rejected or denied insurance claims that would interrupt cash flow. Physicians who code claims and third-party payers that process them are mostly getting ICD-10 right.

However, a few experts have heard unsettling boos about rising denial rates, and almost everyone with something to say about codes and claims processing is apprehensive about what will happen after October 1. That date marks the end of a 12-month grace period set by Medicare and a number of large health insurers for tolerating less than perfect ICD-10 coding. If and when these payers bare their teeth over ICD-10, there could be blood in the water.

There is another type of ICD-10 fallout to consider other than claims denials. A March survey by the Workgroup for Electronic Data Exchange found a slight decrease in productivity for healthcare providers who grapple with code selection and required clinical documentation. However, it is likely that with time, more providers will master the demands of ICD-10 coding and resume their former pace.

One company with a bird’s-eye view of ICD-10 coding is Change Healthcare (formerly Emdeon), which routes more than a billion provider claims annually as a clearinghouse to public and private payers. In that role, Change Healthcare may reject claims with missing or incorrect information and bounce them back to providers for a fix. And when Change Healthcare forwards seemingly clean claims to third-party payers, up-front rejection at that next level also is possible.

Mike Denison, the company’s senior vice president and ICD-10 program manager, said the overall rejection rate in the fourth quarter of 2015 essentially matched that for the preceding quarter, just before ICD-10 debuted. “It was good to see out-of-the-gate readiness on the part of industry,” Denison told Medscape Medical News.

The same pattern holds true for claims that third-party payers accept for processing, but eventually deny, Denison said. “It’s increased by less than 1%, and the reasons mostly had nothing to do with ICD-10.”

The Center for Medicare & Medicaid Services (CMS) reported similar glad tidings for ICD-10, at least during the last quarter of 2015. Both rejection and denial rates rose by less than 1% after the new codes took effect.

The big picture statistics on claims processing in the ICD-10 era buttress reports from the front lines of medicine.

“It’s gone pretty smoothly,” said Wanda Filer, MD, the president of the American Academy of Family Physicians, in an interview with Medscape Medical News. “We got a few calls from members in the beginning, but the problems seemed to have been corrected.”

Perhaps most important, the American Academy of Family Physicians is not hearing stories of physicians pushed into a cash flow crisis because ICD-10 coding fouled up claims processing, according to Dr Filer.

Are Denials Creeping Up?

Dr Filer and others attribute the no-drama rollout of ICD-10 in part to a decision by CMS to refrain from denying or auditing any claim solely on the basis of code specificity as long as the physician chooses a valid code from the right family or category for the condition. For example, there are 70 ICD-10 codes for various forms of Hodgkin’s lymphoma, all of which begin with family designator “C81.” As long as a physician treating Hodgkin’s lymphoma chooses one of the 70 codes and gets “C81” right, CMS will not deny payment. A number of major commercial health insurers such as Aetna and Anthem announced they initially would take the same lenient approach as CMS.

However, one coding expert says commercial payers that promised to cut physicians slack are incrementally requiring more and more code specificity, all the way to the last character. The new codes can contain as many as seven characters, spelling out details like the location of conditions and injuries, laterality, clinical manifestations, and other criteria.

This increased strictness, Charland told Medscape Medical News, coincides with a climb in claims denials detected by an informal ICD10 Monitor survey last month of coding and billing specialists, mostly in the hospital realm. The online publication found that only 13% of respondents reported no increase in denials, whereas 71% had seen them rise by up to 30%, with the remainder experiencing even larger spikes.

Juxtaposing these survey results next to assessments from the likes of CMS and all-is-well anecdotes creates a mixed message about the state of ICD-10 implementation, said Charland. “I think it’s too soon to know what the true impact will be.”

To be sure, even Changing Healthcare’s Mike Denison acknowledges that the big picture of ICD-10 includes a few casualties: physicians who failed to update their billing and collection software or neglected coding education. “Providers who didn’t prepare are experiencing a high degree of pain,” he said.

The approaching close of the 1-year grace set by CMS and major health insurers on October 1 is stoking anxiety about the prospect of more claims denials based on faulty ICD-10 coding.

“I guarantee there’ll be an upswing in denials,” Deborah Grider, a practice management consultant with KarenZupko and Associates, told Medscape Medical News “Everybody in the industry is anticipating this.”

What especially worries Grider and other experts is that the coding grace period has lulled too many physicians into a sense of complacency when they should be using the 12 months to master ICD-10.

To prepare for a likely coding crackdown by payers, medical practices should closely monitor their claim denials and break down the reasons for the insurer’s nyet, according to Grider. These can include an invalid code, an unspecified code when a more specific code is required, or a failure to meet medical necessity requirements.

Practices can track denials by payer as well as physician using denial management systems that come with most good billing and collection software. This analysis can help practices correct diagnostic coding errors, avoid denials, and survive after-the-fact payer audits of medical claims, which may increase as the honeymoon phase of ICD-10 comes to a close, according to Grider.

Even though the initial implementation of the new codes has been calm, this expert still has qualms.

Said Grider: “We don’t know what’s going to happen next.”