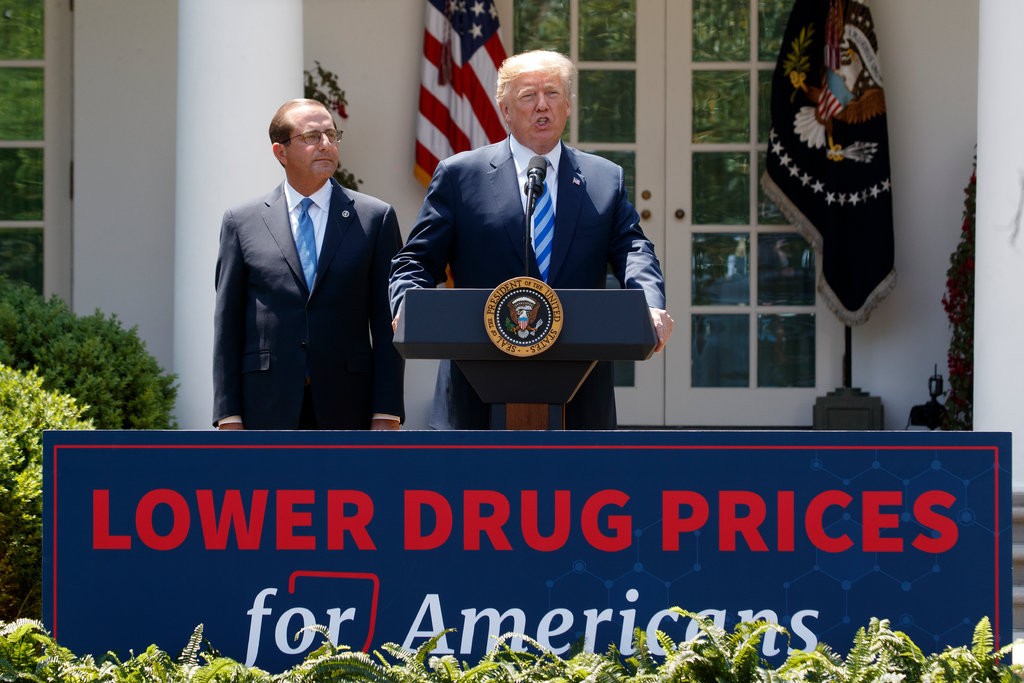 WASHINGTON — President Trump vowed on Friday to “bring soaring drug prices back down to earth” by promoting competition among pharmaceutical companies, and he suggested that the government could require drugmakers to disclose prices in their ubiquitous television advertising.

But he dropped the popular and populist proposals of his presidential campaign, opting not to have the federal government directly negotiate lower drug prices for Medicare. And he chose not to allow American consumers to import low-cost medicines from abroad.

He would instead give private entities more tools to negotiate better deals on behalf of consumers, insurers and employers.

Speaking in the sun-splashed Rose Garden of the White House, Mr. Trump said that a “tangled web of special interests” had conspired to keep drug prices high at the expense of American consumers.

“Everyone involved in the broken system — the drugmakers, insurance companies, distributors, pharmacy benefit managers and many others — contribute to the problem,” Mr. Trump said. “Government has also been part of the problem because previous leaders turned a blind eye to this incredible abuse. But under this administration we are putting American patients first.”

His proposals hardly put a scare into the system he criticized.

Ronny Gal, a securities analyst at Sanford C. Bernstein & Company, said the president’s speech was “very, very positive to pharma,” and he added, “We have not seen anything about that speech which should concern investors” in the pharmaceutical industry.

Shares of several major drug and biotech companies rose immediately after the speech, as did the stocks of pharmacy benefit managers, the “middlemen” who Mr. Trump said had gotten “very, very rich.” The Nasdaq Biotechnology Index rose 2.7 percent on Friday. CVS Health, which manages pharmacy benefits for many insurers and employers, finished up 3.2 percent.

Mr. Trump and other Republicans are eager to show an achievement on health care this year to counter arguments by Democrats who say that Americans are losing coverage because of Mr. Trump’s efforts to sabotage the Affordable Care Act. Soaring pharmaceutical prices are directly hitting consumer wallets, and high-profile cases — like the sudden jump in the price of EpiPens or the jailing of the hedge fund manager Martin Shkreli, who greatly increased the price of a drug under his control — have turned pharmaceuticals into a hot political topic.

Many of Mr. Trump’s ideas can be put into effect through regulations or guidance documents. Some will require legislation.

Republicans in Congress welcomed the president’s attention to high drug prices and promised to review his proposals, which Mr. Trump said would “derail the gravy train for special interests.”

Democrats embraced the opportunity to push health care back to the center of the political debate.

“President Trump offered little more than window dressing to combat the rising cost of drugs — a problem that is pinching the pocketbook of far too many Americans,” Senator Chuck Schumer of New York, the Democratic leader, said after the speech. “We Democrats have offered a better deal on prescription drugs through true transparency, Medicare Part D negotiation, and a cop on the beat to police and stop exorbitant price hikes.”

After supporting some of those same proposals on the campaign trail, Mr. Trump pivoted to a different approach. He said his administration would provide new powers for Medicare’s private prescription drug plans, known as Part D, to negotiate lower prices but he would not use the purchasing power of the federal government to conduct direct negotiations. He said he would make it easier for pharmacists to inform patients of cheaper alternatives and would speed the approval of over-the-counter drugs “so that patients can get more medicines without prescription.”

Mr. Trump also denounced foreign countries that he said “extort unreasonably low prices from U.S. drugmakers” so that their citizens often pay much less than American consumers for the same drugs.

“It’s time to end the global freeloading once and for all,” Mr. Trump said.

It is not clear why higher profits in other countries would be passed on to American consumers in the form of lower prices, and officials in those countries pushed back hard.

“With our price regulations, drug companies are still making profits — just lower profits than in the United States,” said Dr. Mitchell Levine, the chairman of Canada’s Patented Medicine Prices Review Board, which reviews prices to ensure they are not excessive.

The administration floated several ideas that could radically change the marketing of prescription drugs.

Alex M. Azar II, the secretary of health and human services, said the Food and Drug Administration would explore requiring drug companies to disclose list prices in their television advertisements.

The government, he said, will consider whether to “outlaw rebates” — the discounts and price concessions that are a key link in the drug supply chain. Pharmacy benefit managers are hired by insurers and large employers to negotiate lower drug prices, but they also receive rebate payments from drugmakers, creating a potential conflict of interest, the administration said.

Mr. Trump said he would end “the dishonest double-dealing that allows the middleman to pocket rebates and discounts that should be passed on to consumers and patients.”

Mark Merritt, the president and chief executive of the Pharmaceutical Care Management Association, which represents drug benefit managers, said the real problem was the high prices set by drugmakers.

“Getting rid of rebates and other price concessions would leave patients and payers, including Medicaid and Medicare, at the mercy of drug manufacturers’ pricing strategies,” Mr. Merritt said.

Thomas M. Moriarty, an executive vice president of CVS Health, said his company already offers clients the option to share rebates and discounts with consumers when they fill prescriptions.

Experts said some of the president’s ideas could help lower drug prices.

“It’s framed as a pro-competitive agenda, and touches on a range of government programs that the administration can change through regulation — so that the president can take unilateral action,” said Daniel N. Mendelson, the president of Avalere Health, a research and consulting company. “The trick here for the administration is to do something visible before the midterm elections, so they can take credit for an action that reduces drug prices for consumers.”

The administration would lower out-of-pocket costs for Medicare patients by requiring prescription drug plans to pass on some of the discounts and rebates they receive from drug manufacturers. Patients could see those savings at the pharmacy counter. At the same time, Medicare officials say, there could be a modest increase in premiums for Medicare drug coverage.

Health policy experts like this idea because it reduces the burden on patients with serious chronic illnesses and spreads the expense of needed medications across the entire insured population.

But Democrats said Mr. Trump’s policy prescriptions fell far short of what was needed, especially next to the populist promises he made during the 2016 campaign.

“I think very expensive champagne will be popping in drug company boardrooms across the country tonight,” said Representative Elijah E. Cummings, Democrat of Maryland, who has been investigating drug prices for the last year. “The president is apparently abandoning his campaign promise to authorize Medicare to negotiate directly with drug companies to lower prices.”

Administration officials were somewhat defensive about the president’s plan, saying it was bold and significant even though it was not what Democrats wanted — or what candidate Trump favored.

In a round of television interviews on Friday, Mr. Azar said the president’s plan included “over 50 different initiatives — very sophisticated, the kind of thing you’d expect from a C.E.O. like Donald Trump, getting at the real heart of the business problem.”

Mr. Azar said the president’s plan would “unleash those who negotiate for us with the greater powers of the private sector” to obtain good deals.

In trade negotiations, the White House wants to put pressure on other countries to increase the prices of brand-name drugs, with the expectation that pharmaceutical companies would then lower prices here at home.

America’s trading partners “need to pay more because they’re using socialist price controls, market access controls, to get unfair pricing,” said Mr. Azar, a former top executive at the drugmaker Eli Lilly and Company. “And they’re doing it on the backs of their patients. God help you if you get cancer in some of these countries.”

“Drug manufacturers in the United States set their own prices, and that is not the norm elsewhere in the world,” a spokesman for the 28-member European Union said on Friday. “E.U. member states have government entities that either negotiate drug prices or decide not to cover drugs whose prices they deem excessive. No similar negotiating happens in the U.S.”

Medical Billing ? Credentialing? The Firm Services has your answers.