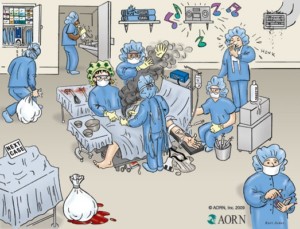 There are two groups Community Health Systems Inc. can’t push too far: the doctors at its hospitals, and the debtholders it owes billions of dollars. Right now, the creditors are winning, and the doctors aren’t happy.

In Fort Wayne, Indiana, the rancor about Community’s neglect of a local health system has gotten so bad that a group of doctors tried to get rid of corporate ownership and buy the company out. And 1,500 miles away on the island of Key West, Florida, doctors say patients are being overcharged so that Community, sometimes called CHS, can rake in cash.

The two locations are among Community’s most lucrative, and their conflicts are part of the flip side of an industrywide acquisition binge over the last decade. For-profit hospital chains like Community borrowed billions to snap up rivals, facing massive debt reimbursements just as the benefits of the Affordable Care Act, known as Obamacare, began to wane.

“I understand that they have billions in debt and may need to take money from this chain to service it,” said William Pond, an anesthesiologist at one of the Fort Wayne hospitals and president of the county health department’s executive board. “But it’s very disappointing to see the course that CHS is taking and the devastating effect they’re having on our community.”

Once the biggest U.S. for-profit hospital chain, Community is selling off other, poorly performing facilities to pay off $2 billion of its $15 billion in debt. Yet even as the company skimps on spending and patient satisfaction lags at key facilities like Fort Wayne, its bonds are rising in value — an indication that debtholders are betting that the chain will make a financial turnaround.

The company’s $3 billion of 6.875 percent bonds due February 2022 have gained almost 30 percent this year and were changing hands at 89 cents on the dollar, according to Trace, the bond-price reporting system of the Financial Industry Regulatory Authority. The debt still trades at yields about 8 percentage points more than government debt.

If the chain can’t subdue the unrest at its most profitable locations, it’s not clear how successful the turnaround will be. Indiana and Key West represent just nine of Community’s about 150 hospitals, yet they contribute an estimated 16 percent of the company’s adjusted earnings before interest, taxes, depreciation and amortization, according to Mizuho Securities analyst Sheryl Skolnick.

Quality has been suffering at the flagship Lutheran Hospital in Fort Wayne, which has about 400 beds. Patients rate their overall experience at two stars, compared with four stars at the crosstown hospital owned by nonprofit Parkview Health, according to the Centers for Medicare and Medicaid Services’ Medicare.gov website.

“The doctors are great but it’s a dirty, dingy hospital,” said Chuck Surack, founder of Sweetwater Sound Inc., a music retailer in Fort Wayne, who is considering taking his 1,500 employees to the cross-town rival if quality doesn’t improve. Community “doesn’t invest in the facilities.”

Community is working to support Lutheran “with the facilities and resources they need,” said company spokeswoman Tomi Galin. The Franklin, Tennessee-based chain has spent $400 million on upgrades since buying Lutheran in 2007, including construction of a free-standing emergency room and robotic surgery systems, and has given raises to most employees, she said in an email.

Complaints about Key West, where patients have no other choice than the Community-run hospital short of traveling 50 miles or to the mainland, came to a head last year when politicians tried to cancel the company’s 30-year lease on the facility. They backed off after Community replaced the hospital’s chief executive and other managers, although a local group continues to collect stories from unhappy patients.

Quality measures and patient satisfaction are improving at the facility, called Lower Keys Medical Center, and Community is investing $20 million in infrastructure, according to Galin, the spokeswoman. Still, doctors said patients are overcharged, according to Richard Payne, a city commissioner. Lower Keys had an average revenue of $13,348 per patient last year, compared with a median of $8,269 at Community’s 21 Florida hospitals, according to Morrow, the Franklin Trust analyst.

“This is going to fester and get worse and worse,” Payne said. “People who live in the Keys go out of town for treatment. Some people have moved so they can get good treatment at a reasonable price.”

The anger at Fort Wayne’s Lutheran Health Network, however, caught the company unaware.

“Frankly, we were surprised by some of these concerns,” Community Chief Executive Officer Wayne Smith and Chief Operating Officer Tim Hingtgen said in a May 22 letter to Lutheran employees. “We believed things were going well, based on reports we received from your market and division leadership.”

Analysts call the eight-hospital Lutheran system Community’s “crown jewel,” as it brings in an estimated $300 million in annual profit. Its situation embodies the dilemma faced by the chain: It needs every last penny it can find to pay down debt, yet also needs to invest in the long-term health of its facilities to build the future for the business.

“We’re seeing dissatisfaction in some of their top-performing communities,” said John Morrow, a managing director at Franklin Trust Ratings who analyzes hospitals. “They’re not focused on the tactics of running hospitals.”

Community’s shares have slumped more than 80 percent since their 2015 peak, a slide that began as the $3.9 billion acquisition of rival Health Management Associates in 2014 soured.

After putting off buying a new $80 million medical records system for Lutheran, Community recently committed to the purchase. But time is running out to get staff trained before the old system goes out of service, said John Fallon, a surgeon and board member at the Lutheran’s Dupont Hospital.

“We can’t just go back to pencil and paper,” Fallon said. “They’ve really pushed us to the limit on this one.”

Dupont’s board issued a no-confidence vote in Community last month, saying the relationship was “beyond salvage or repair.” A group of 300 doctors who own 20 percent of the network offered $2.4 billion to buy the rest, with seventeen members of the Indiana General Assembly supporting the bid. Community turned the offer down, saying it was about $1 billion too low and that the doctors’ group had declined to sign a customary agreement barring disclosure and disparagement.

The Fort Wayne doctors responded Wednesday, saying in a letter to Lutheran Health Network employees that Community’s demands on disclosure were so restrictive, they effectively sabotaged efforts to find a partner to purchase the network.

“Compliance with CHS’s proposed restrictions would require that we not report faulty equipment to maintenance and that we not disclose a medical mistake to anyone, including patients and staff,” they said in the letter. “We could not accept what essentially was a gag-order on anything related to LHN that was not good news.”

Community disagrees with any allegation that it would hinder any physician’s ability to discuss concerns about patient safety and quality, spokeswoman Galin said in an email, adding that the company is focused on its commitments to advance quality care across the Lutheran network.

The company said it first heard in November that doctors were interested in buying the Lutheran network. On May 11, the company announced $500 million in capital projects to spruce up the network and “refresh” Lutheran Hospital.

Doctors say headquarters’ stinginess has particularly hurt surgeries, one of the biggest profit centers for hospitals. At the end of the year, when surgery demand accelerates, urogynecologist Scott Boyd frequently can’t get enough nurses and technicians for procedures, and sometimes reschedules patients to Parkview, the nonprofit cross-town rival.

Parkview said in a statement that it’s prepared to “support anyone in need of care during this time,” although it can’t see a direct impact of any dissatisfaction with Lutheran on its own patient volumes.

Meanwhile Parkview just snapped up the only gynecological cancer specialist in town, Boyd said. Lutheran had a chance to hire the doctor, but moved too slowly, he said.

“It was a huge coup,” the doctor said.

What’s left to do in the week before ICD-10 coding goes live?