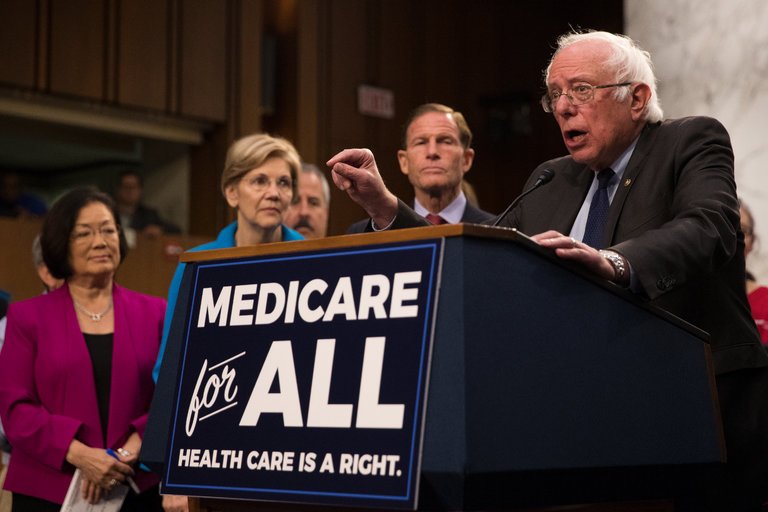 WASHINGTON — In one Senate office building, some of the leading lights of the Democratic Party gathered Wednesday to embrace what was once a proposal only of the far left: a huge expansion of Medicare, large enough to open the popular, government-run health program to all Americans.

In another Senate office building, a smaller but equally adamant group of Republican senators stood together to take one last stab at dismantling the Affordable Care Act. They proposed instead to send each state a lump sum of federal money, along with sweeping new discretion over how to use it.

Important elements in both parties are trying to move beyond President Barack Obama’s health care law, which has always been a complicated, politically difficult mix of government and private health insurance. But they are moving in radically different directions.

The proposals appeared to have only one thing in common: Neither is likely to be enacted any time soon.

Senator Bernie Sanders of Vermont, the onetime candidate for the Democratic presidential nomination, proposed what he called “a Medicare-for-all, single-payer health care system,” and he said 16 Democratic senators supported it. Those included Elizabeth Warren of Massachusetts, Cory Booker of New Jersey, Kirsten E. Gillibrand of New York and Kamala Harris of California — all names on the list of possible candidates for president in 2020.

“Instead of wasting hundreds of billions of dollars trying to administer an enormously complicated system of hundreds of separate insurance plans, there would be one insurance plan for the American people with one single payer,” said Mr. Sanders, the ringmaster of an event that felt like a political rally, with banners and placards, consumers and patients, labor union members, nurses in red T-shirts and an audience full of fans who applauded, whooped and hollered.

Their proposal was the last gasp of Republican efforts to undo the Affordable Care Act. Those efforts, which seemed sure of success in January, appeared to meet a dead end on the Senate floor in late July, when Republicans could not muster even a simple majority for a repeal bill. Mr. Graham’s gathering had the feel of a health policy discussion at a conservative think tank.

While Mr. Sanders was joined by possible presidential contenders, Mr. Graham and Mr. Cassidy were accompanied by two lower-profile senators, Dean Heller of Nevada and Ron Johnson of Wisconsin.

“The only thing stopping us from having this idea debated on the floor of the United States Senate is lack of leadership,” Mr. Graham said, pleading for help from President Trump and the Senate majority leader, Mitch McConnell of Kentucky.

An hour later Mr. Trump issued a statement saying, “I sincerely hope that Senators Graham and Cassidy have found a way to address the Obamacare crisis.’’

Under the Graham-Cassidy proposal, money would be distributed to states based on a complex formula. The regional cost of living would be one factor, but the sponsors acknowledged that higher-spending states like Massachusetts would receive less than under current law.

The block grant would replace federal money now being spent under the Affordable Care Act for the expansion of Medicaid, for premium tax credits and for subsidies that reimburse insurers for reducing out-of-pocket costs for low-income people.

A bill supported by Senator Lindsey Graham of South Carolina would take money spent under the Affordable Care Act and give it to states in the form of block grants. Credit Tom Brenner/The New York Times
The Graham-Cassidy bill would repeal the Affordable Care Act’s requirements for most Americans to have coverage and for larger employers to offer it. And it would make deep cuts in Medicaid.

But time is running out on the bill. After Sept. 30, the Graham-Cassidy legislation would lose procedural protections that allow passage in the Senate with a simple majority, rather than the 60 votes often required for major legislation.

Even with those protections, Senator John Cornyn of Texas, the No. 2 Senate Republican, said he had seen no evidence that the bill had the votes needed to win approval in the Senate in the next two weeks. And he noted that it had not been analyzed by the Congressional Budget Office, which could take a week or two to estimate how much the bill would cost and how many people would lose or gain coverage.

Mr. Sanders said he was prepared for a long battle to establish health care as a right. (That was supposedly a goal of the Affordable Care Act.) His bill could serve as a political manifesto and a possible campaign platform for progressive candidates.

That so many Democrats are embracing it is a milestone. About 60 percent of House Democrats have endorsed a “Medicare for all” bill introduced by Representative John Conyers Jr., Democrat of Michigan.

But Democratic leaders in the House and the Senate are steering clear, saying their immediate concern is to protect coverage under the Affordable Care Act, which still faces attacks from Republicans.

Mr. Sanders’s bill would expand Medicare, one of the nation’s largest, most popular entitlement programs. The federal government would establish an annual budget for covered health care services. Medicare’s benefit package would be expanded to include coverage of dental care, vision services and hearing aids. The bill would also cover “comprehensive reproductive, maternity and newborn care, including abortion,” according to a summary prepared by Mr. Sanders’s office.

How much is ICD-10 productivity hurting?

They Are Warriors of All Things Medical