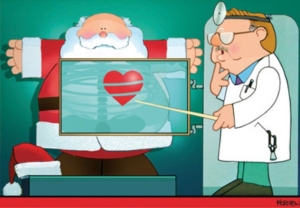 We all have one: a beloved holiday flick that inspires us to deck the halls, snuggle up, and press play. Whether you’re a die-hard fan of a Christmas classic, or you prefer the elven shenanigans of Will Ferrell, here’s one holiday treat everyone should enjoy: the coder’s complete ICD-10 list for holiday films.

Clark Griswold, our favorite overly optimistic father, is no doubt a Christmas movie legend. Despite his high hopes for the perfect family Christmas, he gets more than his fair share of merry misfortune. Blame it on his questionable light-hanging practices, extreme sled-riding, and obsession with that Christmas bonus (for a pool, of course).

After George Bailey, a failing businessman, crashes his car into a tree, he wishes he’d never been born. But a guardian angel shows him that the world would be a grim place if he didn’t exist, and George realizes he really does have a wonderful life.

How the Grinch Stole Christmas (1966)

Leave it to our favorite Seussian grouch to remind us that the holidays aren’t about the gifts. The self-exiled green monster attempts to steal Christmas from the quaint Whoville, only to learn that the festivities go on without the trimmings, the trees, or the roast beast. With a renewed faith in who-manity, the Grinch’s small heart grows three sizes in one day.

When noticeably-too-tall Buddy accepts that he’s not like everyone else in the North Pole, he heads out in search of his real father. But he soon discovers that the norms of Santa society don’t translate well in New York City. His new family struggles to accept his overly excitable behavior, possibly caused by a diet of the elf’s four food groups: candy, candy canes, candy corn, and syrup.

As you go to the movies, or however you enjoy your holiday, stay safe and happy in the New Year!

Happy Holidays from The Firm Services.