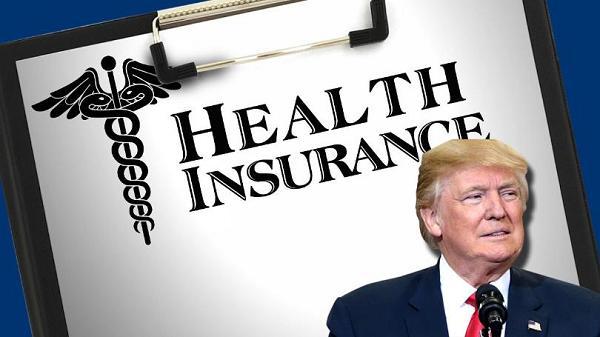 More than 95% of healthcare groups that have commented on President Trump’s effort to weaken Obama-era health insurance rules criticized or outright opposed the proposals, according to a Times review of thousands of official comment letters filed with federal agencies.

The extraordinary one-sided outpouring came from more than 300 patient and consumer advocates, physician and nurse organizations and trade groups representing hospitals, clinics and health insurers across the country, the review found.

Kris Haltmeyer, vice president of health policy and analysis at the Blue Cross Blue Shield Assn., said he couldn’t recall a similar show of opposition in his more than 22 years at the trade group, which represents Blue Cross and Blue Shield health plans and is among the organizations that have expressed serious reservations about the administration’s proposed regulations.

“This seems to be a pretty overwhelming statement of concern,” Haltmeyer said.

State insurance regulators from both political parties have also warned that the administration’s proposals could destabilize insurance markets, raise premiums for sick Americans and open the door to insurance fraud.

And dozens of industry leaders and other experts have called on the administration to rethink moves to scale back consumer protections enacted through the Affordable Care Act, often called Obamacare.

“Basically anybody who knows anything about healthcare is opposed to these proposals,” said Sandy Praeger, a former Republican state insurance regulator in Kansas and onetime president of the National Assn. of Insurance Commissioners. “It’s amazing.”

Obamacare 101: A primer on key issues in the debate over repealing and replacing the Affordable Care Act. »
After the failure to repeal the healthcare law last year, the Trump administration is weighing two controversial new rules to loosen regulations governing health plans. One would expand the availability of short-term coverage plans that last less than a year. The other would make it easier for self-employed Americans and small businesses to band together to form so-called association health plans.

These plans — which administration officials say will be more affordable — would not have to offer the full set of health benefits required under the 2010 law and in some cases could turn away sick customers.

Altogether, more than 95% — or 266 of 279 — of the healthcare groups that filed comments about the proposed association health plan regulation expressed serious concern or opposed it, the Times analysis found.

And more than 98% — or 335 of 340 — of the healthcare groups that commented on the proposal to loosen restrictions on short-term health plans criticized it, in many cases warning that the rule could gravely hurt sick patients.

“As advocates for our communities, we implore you to protect patients and consumers, including individuals with preexisting conditions and persons with disabilities,” a coalition of 106 groups noted in one letter urging the administration to withdraw the proposal.

Among the groups were virtually every leading patient advocate in the county, including the American Lung Assn., the American Heart Assn., the Cystic Fibrosis Foundation, the March of Dimes, the National Multiple Sclerosis Society, Susan G. Komen, AARP and the advocacy arm of the American Cancer Society.

Not a single group representing patients, physicians, nurses or hospitals voiced support in the public comments for the two Trump administration proposals.

Most of the comments were from individual Americans, many of whom shared concerns about access to health coverage. The Times identified comments from healthcare groups to gauge the opinions of experts who work in the system or advocate for patients.

Officials from 25 states — including insurance regulators, attorneys general and insurance marketplace directors — also submitted comments. Most were highly critical, with the exception of insurance officials from six states who welcomed one or both of the administration proposals.

Administration officials have said relaxing regulations and allowing more health plans that offer limited benefits or that may exclude sick consumers will provide more options to people who are currently being priced out of the health insurance market.

“We want people to have access to competitive, affordable health insurance,” Health and Human Services Secretary Alex Azar told lawmakers on Capitol Hill recently. “Unfortunately the Affordable Care Act is not delivering on that.”

The healthcare law has helped expand coverage to some 20 million previously uninsured Americans, through the expansion of state Medicaid programs for the poor and through new marketplaces that offer subsidized health plans for low- and moderate-income people who don’t get coverage through an employer.

But the marketplace plans — which must offer a basic set of health benefits and cannot turn away sick consumers — have become more and more expensive, as premiums that began to rise under President Obama have shot up further under the current administration.

That has made coverage increasingly unaffordable for the small share of Americans — perhaps as many as 15 million — who don’t receive coverage from their employers or from a government plan and make too much to qualify for federal marketplace subsidies. The subsidies cut off after about $48,000 for an individual and $100,000 for a family of four.

Short-term plans — which are currently limited to three months but which the administration wants to extend to a year — could also be allowed to turn away sick people. That would allow them to charge even lower rates.

Easing insurance rules has cheered some business groups, particularly those representing small employers and independent workers such as real estate agents and court reporters, which backed an expansion of association health plans.

“While such plans are clearly not the best option for many Americans, [short-term] plans could expand affordable access to health coverage for certain individuals,” said the Health Agents for America, one of the five healthcare groups writing in support of the Trump administration rule.

But they have cautioned the administration that loosening current rules creates many more problems than it solves.

Many warned that allowing healthier Americans to buy plans that don’t cover expensive medications or other medical benefits will drive up costs for sick patients who have no choice but to buy more costly, comprehensive coverage.

They were joined by 10 hospital associations, five nursing groups and 176 patient and consumer advocates who criticized the proposal.

AARP said that the proposal would “greatly increase the likelihood that working Americans, especially those age 50-64, would face higher insurance premiums and loss of access to critical health insurance coverage.”

The outpouring against the proposed short-term rule was even more overwhelming.

Many sounded the same concern about the unfairness of making Americans suffering from mental illness, cancer, HIV/AIDS or other diseases pay more for coverage.

Mental Health America warned that the short-term plans were “not a realistic option for people with chronic behavioral health concerns.”

And the American Diabetes Assn. said that diabetics would be left with “two undesirable options”: an expensive plan with adequate benefits or a short-term plan “with severely limited coverage and high out-of-pocket costs.”

Many patient advocates, physician groups and others also cautioned that expanding skimpier plans could leave healthier consumers who buy those plans without protection if they got sick, something that happened often before the 2010 heathcare law.

The American Academy of Family Physicians, for example, noted that expanding short-term plans “could subject patients to catastrophic medical bills and medical bankruptcy.”

And the National Assn. of Insurance Commissioners warned that association health plans had a long history of fraud and insolvency that left consumers in the lurch.

These concerns were echoed by the leading health insurance trade groups, as well as many individual health insurers that cautioned that rates would only increase as looser rules further destabilized insurance markets across the country.

The Trump administration has not indicated when it will finalize the proposed new insurance regulations.

Medicare Advantage Plans Can Pay for Many LTC Services in 2019: Feds