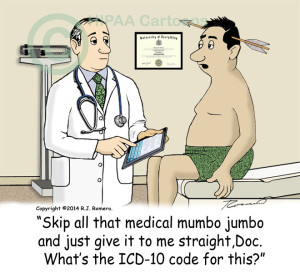 The Firm Services has the latest information regarding ICD-10 and its implementation.

A general assumption had been that states would be aligning their worker’s compensation regulations with the rest of those of the healthcare industry in order to adopt the ICD-10 regulations. As of Oct. 1, 2015, there were only 21 states that had aligned with the Centers for Medicare & Medicaid Services (CMS) ICD-10 requirement, according to the WEDI Property and Casualty ICD-10 State Readiness Resource Center and the International Association of Industrial Accident Boards and Commissions (IAIABC) ICD-10 State Survey results. The states that had aligned with the CMS ICD-10 regulations included Alabama, California, Delaware, Florida, Georgia, Idaho, Illinois, Louisiana, Maryland, Massachusetts, Minnesota, North Carolina, New Hampshire, Nevada, New York, Ohio, Oregon, Pennsylvania, South Dakota, Texas, Washington, and the U.S. Department of Labor.

So, what has been the impact to stakeholders post-ICD-10 in the other 29 states?

The following is a summary profile of the ICD-10 status of the other 29 states and reported stakeholder impact:

Three states with pending ICD-10 regulations post-Oct. 1, 2015 included Alaska, Wyoming, and Tennessee. The following is the reported ICD-10 post-implementation impact:
Wyoming is allowing providers to submit ICD-9 and ICD-10 for one year as a transition plan and will adopt ICD-10 when their rulemaking becomes effective.

Alaska and Tennessee have encouraged stakeholders to move forward with ICD-10 while their rulemaking process remains pending.
Payer Impact: Payers that do business in these states are required to support ICD-10 and ICD-9 codes during the regulatory transition period.
Provider Impact: Providers that are submitting ICD-10 claims have reported no impact to their revenue cycle management due to payers accepting dual coding.

Twelve states did not adopt ICD-10, as it is not relevant to their administrative rule language or fee schedules (and/or they do not have statutory authority). All of these states have highly recommended that stakeholders support the CMS ICD-10 regulations. The states that fall into this category include Arizona, Arkansas, Hawaii, Iowa, Kansas, Kentucky, Missouri, Mississippi, Oklahoma, Rhode Island, Utah, and Vermont.
Payer Impact: Payers must support both ICD-9 and ICD-10 coding in their systems even though the coding has no impact to their claims adjudication and/or payment processes.
Provider Impact: No impact to revenue cycle management processes has been reported, as the ICD coding is irrelevant to the payment fee schedule.

Other states that do not have statute authority to regulate the use of ICD codes, such as Iowa, Oklahoma, Vermont, and Wisconsin, also did not adopt ICD-10. In this scenario, the ICD-10 determination was to be made by the individual payer for that state. All of these states had highly recommended that stakeholders align with the CMS ICD-10 regulations.
Payer Impact: Payers are supporting both ICD-9 and ICD-10 coding in their systems even though the coding is not relevant to the claim adjudication process. Additional ICD-10 considerations among payers include capturing ICD-10 coding for state reporting, NCCI, and CMS Section 1.11 reporting requirements.
Provider Impact: No impact to revenue cycle management processes has been reported, as the ICD coding is irrelevant to the payment fee schedule.
Where are we now?

Since most of the worker’s compensation stakeholders (providers, clearinghouses, and third-party vendors) are the same as those for commercial and government lines of business, there were significant concerns if the states did not align with the CMS ICD-10 regulations. Overall, payers, providers, and states that participated in the January 2016 WEDI Property and Casualty Workgroup call reported that ICD-10 has had little to no impact on their day-to-day business operations.