New ICD-10 codes not likely to burden most providers 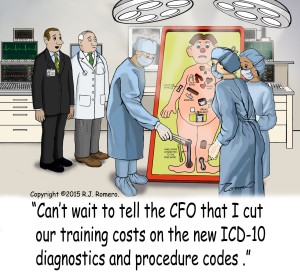 The recent federal announcement that about 5,600 new ICD-10 codes will be added in October may have some provider organizations worried they’ll face a heavy burden to accommodate such a large number of additions so soon after the transition to ICD-10.

But it’s really not a heavy lift, those familiar with coding and the industry say.

For the most part, financial, clinical and ancillary software vendors should be making the updates in electronic systems, says Sue Bowman, senior director of coding policy and compliance at the American Health Information Management Association.
When a physician or coder enters a diagnostic term, after October 1, the systems should present additional code options after vendors update their product. However, if a physician coder works from a code book, they’ll need an updated book that contains the new codes.

The last regular ICD-10 coding update came in 2011. Since then, ICD-10 codes haven’t been added, and the list of new codes has built up.

Since 2011, there have been minimal updates, typically only for a small number of new codes that represent new diseases or technologies. For instance, more than a dozen codes were discussed in a recent meeting and under consideration for inclusion in October, Bowman says. The Centers for Disease Control, for instance, proposed a new code for Zika virus disease, A92.5, for implementation in the October update. It is not yet certain that the code will be included because a public comment period follows the proposing of codes, but it’s highly likely the Zika code will be included in the update, she believes.

So overall, providers should not be overly stressed about the new codes, which primarily are coming because the industry has asked for them, such as several new codes for ophthalmology and obstetrics, according to Bowman. In addition, provider associations or societies, particularly physician societies, proposed most of the new codes, so they may offer educational services.