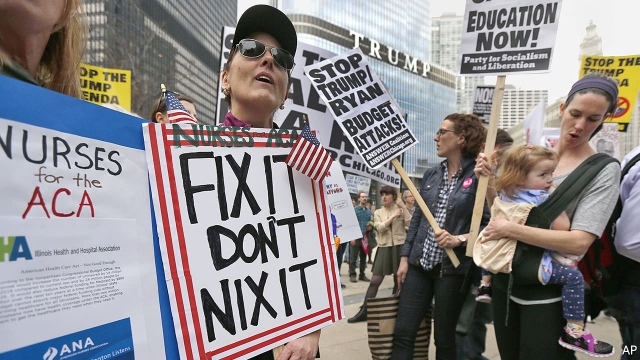 The tax reform bill to be released Thursday will not include a repeal of ObamaCare’s individual mandate, sources say, despite President Trump proposing the idea on Wednesday.

Repealing the mandate would introduce a whole new area of controversy into the bill, and many Republicans think tax reform is hard enough without adding in health care.

Still, it is possible the idea could come back down the road, given that some Republicans are still pushing.

Rep. Kristi Noem (R-S.D.), a member of the House Ways and Means Committee, said Wednesday night that she did not think mandate repeal would be included “just because we didn’t have unanimous agreement on the committee.”

Sen. Tom Cotton (R-Ark.) has been the main proponent of the idea and talked with Trump about it over the weekend.

Repealing the mandate would save around $400 billion, which could be used to help pay for tax cuts, but the Congressional Budget Office also says 15 million more people would be uninsured and premiums would rise 20 percent.

Ways and Means Committee Chairman Kevin Brady (R-Texas) said earlier this week, though, that he did not want to include mandate repeal because he fears it will jeopardize the tax bill since the Senate has been unable to deliver on health-care reform.

Rep. Mark Meadows (R-N.C.), the chairman of the conservative House Freedom Caucus, said Wednesday night that he would push for including mandate repeal and that he thought “ultimately” it would be included in the bill. Meadows said he has talked to Cotton.

Rep. Mark Walker (R-N.C.), the conservative Republican Study Committee chairman, said he had discussed the idea at an RSC meeting with National Economic Council Director Gary Cohn on Wednesday. Walker, though, stopped short of saying he would push for the change, but he noted he would support the idea if it ends up being included.

Questions about ACA, private Medical Insurance and health insurance reimbursement? Physician Credentialing and Revalidation? or other changes in Medicare, Commercial Insurance, and Medicaid billing, credentialing and payments? Call the Firm Services at 512-243-6844