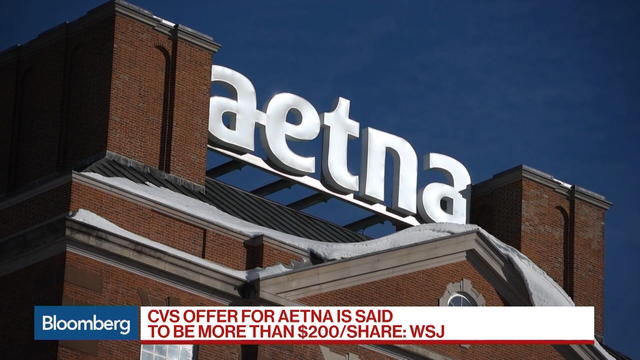 Speculation that CVS Health Corp may be making a play to buy Aetna Inc yesterday followed hot on the heels of report that Amazon Inc. had received pharmacy-wholesaler licenses in a dozen states. While a pharmacy acquiring a health insurer may be an unusual step, analysts see it as potentially bold move to fend of the looming Amazon threat and enter an “evolutionary and revolutionary” new world in health care. Others, however, saw an expensive deal and question whether Aetna would be a willing seller. CVS and Aetna shares both fell on Friday morning, down as much as 4.7 percent and 2.9 percent respectively.

“We see this potential deal as both evolutionary and revolutionary given the dynamic healthcare environment and push toward consumerism coupled with a challenged retail backdrop and the need to combat a looming Amazon threat. In our opinion, the merits of the deal and potential new model is conceptually compelling, with the biggest questions admittedly, execution, integration, and the structure of the deal. Based on our analysis, we estimate the deal could be 24 cents per share, or 3.7 percent accretive to CVS in year one with greater upside over time if the combined entity successfully manages down healthcare cost.

“We think a CVS / AET combination makes a lot of sense. We would imagine a scenario that CVS expands its MinuteClinics or creates mini urgent centers in CVS stores to direct patients to these lower cost settings via copay differentials (i.e., zero co-payment if treated at a MinuteClinic versus $500 at the ER). Similar to formulary management in pharmacy, this type of partnership between a retail pharmacy and a managed care company could be the next generation of formulary management in healthcare services. ER expenses are massive for managed care companies and a lot of non-acute cases are treated in this setting unnecessarily.”

“Assuming the price per share of $200 is both accurate and includes debt, we estimate the 2017 and 2018 enterprise value to Ebitda ratio to be 11.0x and 10.0x consensus estimates, which in our view is reasonable. If we are correct on our thesis in the expansion of MinuteClinics, this valuation does not take into account that investment. We would assume a portion of the deal is paid in stock. Assuming a 50% cash/stock split, we estimate proforma leverage for CVS around ~3.5x.”

“We had viewed this combination as less likely after the contract inked by CVS with Anthem last Wednesday, given it is an EITHER/OR for CVS, not an AND. We had seen the Anthem pharmacy benefit manager (PBM) contract offering a stop gap for CVS not just on the slowing PBM revenue growth but also on front store sales as Anthem’s close to 40 million members shop at CVS retail stores through 2024. However, Anthem is not being viewed as the prize by CVS, and the connection and shared vision of an Aetna-CVS combination is likely too juicy to pass up by the two managements. Further, the likely Amazon entry into retail pharmacy is a major threat to CVS, on top of already dwindling front store sales.”

“The anti-trust challenges look manageable in our view though some Medicare Part D divestiture may be needed to address the combined share and overlap. Anthem will potentially look for another alternative. Maybe resurrect the failed marriage with Express Scripts?? Anything is possible in our view.”

“We see the move into healthcare services as a natural defense against the potential threat of Amazon entering the retail pharmacy market. Our question, however, is why can’t CVS affect the transformation into a healthcare platform on its own? After spending $76 billion for AET, it will have to spend additional capital to transform its retail footprint. Couldn’t CVS effect the changes to its retail footprint and then partner with multiple health plans, including AET, and achieve similar results with less capital? For example, the entire urgent care market is currently $16 billion. CVS could roll up that entire industry and acquire Quest Diagnostics and DaVita for less than the cost of acquiring AET.”

“We believe the potential sale of Aetna has two potentially negative read-throughs for the managed care sector. First, we do not believe Aetna would be a willing seller, even being valued at a 25 percent plus premium, if it believed it could generate similar, or greater, returns for shareholders via organic growth and/or acquisitions. Second, we believe a takeout premium is currently priced into shares of WellCare, Humana, and to a lesser extent, Centene and Molina, with Aetna and Cigna as the most likely potential buyers.”

“While it is impossible to determine if a transaction between CVS and Aetna will
occur and at what price, based on fundamentals, we believe the shares are now
fairly valued. While we believe that a CVS/AET transaction is not implausible,
the risk/reward trade-off given the uncertainty is not attractive.”

“It is not unreasonable to consider CVS as a likely buyer of Aetna. CVS acquired Caremark in 2006, which at the time was a bold move as it combined one of the larger drug retailers with one of the largest pharmacy benefit managers. With the acquisition of Aetna, CVS would continue its transformation to a health services company. The addition of a captive pharmacy network and captive PBM would enhance AET’s health plans’ competitive positioning. UnitedHealth has been an active acquirer of provider assets and owns the third largest PBM. It does not own retail pharmacies. Furthermore, perhaps CVS views Aetna as a counter move to the potential entrance of Amazon into the mail order pharmacy space.”