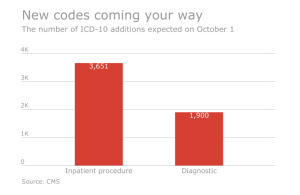 The Centers for Medicare and Medicaid Services and Centers for Disease Control and Prevention have given the green light to adding 3,651 ICD-10 hospital inpatient procedure codes and about 1,900 ICD-10 diagnosis codes, beginning in fiscal year 2017.

According to CMS, the coding update will be implemented on Oct. 1, 2016, and will include the “backlog of all proposals for changes to the code set proposed via the ICD-10 Coordination and Maintenance Committee process during the partial code freeze, and receiving public support.”

The agency attributes the large number of new codes to a partial freeze on updates to the ICD-10-CM and ICD-10 PCS codes that existed prior to the Oct. 1, 2015, ICD-10 transition deadline and which has now been lifted.

The decision to add the codes was made at an ICD-10 Coordination and Maintenance Committee meeting last week. The new diagnosis codes will be included in the hospital inpatient prospective payment system proposed rule for fiscal year 2017, which is expected next month.

There are a total of 75,625 valid ICD-10-PCS codes for the FY 2017 update, as of March 9, 2016. This includes 3,651 new codes which will be added, and 487 code titles which will be revised. Of the codes added, 3,549 new codes (97 percent of the total update) are cardiovascular system codes. And, of the new cardiovascular system codes, 3,084 new codes (84 percent of the total update) resulted from a group of proposals to create unique device values for multiple intraluminal devices and to apply the qualifier Bifurcation to multiple root operation tables for all artery body part values.

Other proposals that resulted in new codes are in the lower joint body systems. In addition, there are new codes for intracranial administration of 10 substances (such as the Gliadel chemotherapy wafer) using an open approach. There are also planned new codes for face transplant, hand transplant and donor organ perfusion.

“The ICD-10 code set was designed to facilitate addition of new codes to cover new diseases, new procedures and new technology,” says Jim Daley, director of IT for BlueCross BlueShield of South Carolina and co-chair of WEDI’s ICD-10 Workgroup. “While the ICD-10 code set is already in place, the addition of these new codes will be a test of the processes organizations have implemented for ongoing maintenance of the code set, similar to what was in place to maintain the ICD-9 codes.”

Daley, who is also a former chairman of WEDI, comments that in addition to merely allowing for the validation of the new codes, healthcare organizations will need to consider the impact of the new codes on clinical documentation, billing and medical policies.

“Organizations should have strong metrics in place to monitor the impact of ICD-10 and to continually assess their business operations in general,” he contends. “These metrics can help identify any issues that may result from the addition of the new codes.”

ICD-10-PCS codes discussed at last week’s ICD-10 Coordination and Maintenance Committee meeting also will be evaluated for implementation on October 1, when regular updates to ICD-10 are set to begin.

The American Health Information Management Association lauded the agency for releasing the details on the new codes at this time.

“AHIMA is pleased that the Centers for Medicare and Medicaid Services (CMS) have released the procedure code list scheduled to go into effect on October 1, 2016, and that the Centers for Disease Control and Prevention (CDC) have indicated their intent to release the diagnosis code list shortly, as part of the thawing of a partial code freeze implemented prior to ICD-10,” said Sue Bowman, senior director of coding policy and compliance, advocacy and public policy for AHIMA.

“Although code updates are generally not released until June, the early release of the code list provides the healthcare community additional time to prepare. Similar to past code set updates, these additional codes will continue to provide greater specificity to tell an even better patient story and keep pace with ever-changing health information demands.”

Most of these new codes are focused on surgical procedures and, for the most part, the changes should have minimal impact on providers, said Richard Morris, CIO for Alpha II, a software vendor. However, he sees the additions of codes as a lot for providers to assimilate.

“This move is significant, marking the largest major change in diagnosis codes in five years,” Morris said. “On an average year, only 150 to 200 codes are changed, where this is almost ten times that amount. This is not the end of the changes, as CMS will soon announce another 500 revisions to existing codes beyond these additions. These revisions will likely be small changes, such as renaming the codes or small additions.

“While this is a major change, it still should be fairly painless to providers depending on where these codes are within their code set,” he added. “To ensure they are ready, providers will want to ensure that their practice management systems, EHR systems and clearinghouses are prepared and up to speed with these new changes.”